A Germany vacation is becoming ever more attractive to visitors from around the globe, above all because of a plethora of cultural events, which take place throughout the year Music-land Germany is the homeland of many of the world’s greatest composers: Bach, Beethoven, Brahms, Handel, Mendelssohn, Wagner, to name just a few, were born in Germany.

Germany has the most castles. They are on hilltops, along the rivers and around the beautiful lakes. Baden-Wuerttemburg has hundreds of picturesque castles with extraordinary history.

It helps us help you if you begin with our vacation planner so we can determine which of our Virtuoso, Germany Travel Advisors are best suited to assist you in planning, to make sure you have fun, get you unbeatable airfare, privileged access, luxury amenities, special touches; save you time and prevent mistakes. We’ve been customizing Europe vacation itineraries for discriminating travelers for more than 20 years.

Among Germany’s traditional events and happenings, the Christmas Markets are a great attractions for attract visitors from near and far. Munich, Nuremberg, Stuttgart, Dresden, Leipzig, Cologne, Bremen, Frankfurt are but a few of these magical markets, some of which date back to the Middle Ages. All major cities and most towns have Christmas markets during the Advent season.

The new and modern Germany, its cities and their beautiful natural surroundings have become a favorite destination for people of all ages and diverse backgrounds. Berlin, the fascinating capital, with its great museums, theaters and restaurants, is one of the most sought-after metropolises in Europe. Great cities such as Munich, Hamburg and Dresden also offer extraordinary cultural and culinary fare.

Last but not least, Germany’s great tourist routes, among them the Romantic Road, the Castle Road and the Fairy Tale Road, make traveling in Germany an unforgettable, rewarding experience.

Germany is historical, modern, busy, lazy, laid-back, quiet, musical, tasteful, dynamic, exhausting, hilly, flat, green, picturesque, sporty, poetic, beer-loving, wunderbar. Germany is a many-sided country. And the opportunities for vacationing in Germany are just as varied. Whether you are underway with family and friends, or on business, are seeking romanticism or planning a city trip, want to actively work out or just be healthily cosseted, take part in courses or seek out culture – all these different wishes can be ideally fulfilled in Germany.

Germany’s many modern cities stem from the time when it consisted of countless small states. The numerous kings, princes and bishops tried to outshine each other in fields like science, culture and architecture.

These power politics were not restricted to the cornerstones for the diverse cityscapes. They were also responsible for the pulsating life in today’s Germany. No other European country has as many shopping malls, cultural highlights, opera houses and theaters of world standard, universities, scientific and industrial centers, international airports, congress and trade fair centers distributed so evenly throughout the entire country.

There is the old and new capital Berlin, speeding on its way to become a mega-metropolis. The 15 state capitals, the innumerable cultural gems, the business and commercial centers. German cities offer that which makes the whole country so appealing: endless variety.

The first associations of Berlin in a nutshell: capital of Prussia, cultural metropolis of the twenties, Reichstag, Berlin wall, reunification, old and new capital. But Berlin is more than that, Today, it is also the gateway to eastern Europe.

Berlin is relaxation. Hardly any other capital has so many parks, forests and recreational lakes and such lovely surroundings for walking, cycling and resting.

Berlin is nightlife. In 300 “in” places, 1500 bars and countless clubs and discos one can turn night into day without any threat of closing time. One can dance to techno and to pop and pub crawl from designer bars via beer gardens to quaint backyard pubs.

Berlin is a museum. The many big and small galleries display from modern to ancient art. Different epochs of history and fields of interest can be viewed in 130 museums. The streets of Charlottenburg, Kreuzberg, Mitte and Prenzlauerberg invite you to take part in their cultural scene. Berlin is a market. No other city offers so many art, antique and flea markets, and weekly fruit & vegetable markets for culinary shopping pleasure. But despite its many superlatives, Berlin is still a regular city. The subway is sometimes late, the weather occasionally fickle and the people now and then irritable. But that’s what makes Berlin sympathetic.

Finding your way around Germany is pretty easy. Many Germans speak English and are pleased to help visitors. Still, there are a few things it is helpful to know before arriving here.

Select exactly the components you want in your vacation. You choose your hotel, room category -from sea views to suites-, rental car, private transfers and customized sightseeing tours. We do it all! Our Virtuoso Travel and Cruise Consultants will create the Germany vacation you have always dreamed of. We always try to exceed your expectations! 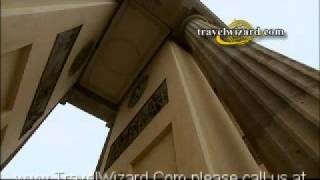 Dear Sharon, We had a wonderful trip to Italy. All of the guides spoke good English and were well informed. The drivers all had very nice cars and were always on time. The rooms were.... Read More


Inspired to Travel?
Fill out our vacation planner >
Travel Tips From TravelWizard.com

It’s a good idea to check the laws of the country before leaving: http://travel.state.gov/travel/cis_pa_tw/cis/cis_1765.html

Start with our vacation planner so we can match you with our most suitable travel advisor. We do it all for you, air, car, accommodations, tours, you name, it in a seamless luxury vacation experience you will treasure for a lifetime.
Call Travel Wizard Today
1 415 827 4981

Your personal connection to the priceless experiences in every corner of the globe!